Navigational widgets are mostly used with active or passive navigation with navigational profiles, so they are not available in Browse Map profile.

Active navigation requires to set a destination, calculate the route (Directions) and start navigation (Go), not necessary with voice guidance. All navigational widgets support that type of navigation.

Passive navigation doesn't require to have a destination point set and works automatically once you switch to any navigational profile, for example 'Driving'. In that case application will try to determine which road you are following and display extra information about it i.e. name, lanes info, max speed available. Please note that this approach is quite unreliable and doesn't support all features.

This widget you can use only with Pro feature OsmAnd Pro subscribers.

The Elevation widget shows a graph with the elevation and slope of your navigation route and your current location on this graph with current altitude and slope. The graph is plotted on two axes. The X-axis is the distance of your route. The Y-axis is the altitude, the value depends on the relief, and the slope displayed as a percentage.

The widget can be turned on/off by following this path:

Interactions with the graph​

When you select a route and press the Start button, the map opens with your current location, the route on it and the widget at the bottom of the screen. On the widget you can see the graph and information about Uphill, Downhill, Grade, distance, altitude, slope angle. You can select the optimal scale and see all possible obstacles on your route.

All values are indicated either for the whole route or only for the selected interval by scaling the graph.

Bearing is the direction to a target outside your vehicle, such as a destination or point of origin. A bearing can be Relative (according to your course), Magnetic (according to the compass). For example, a magnetic bearing of 180° is the direction to the south, and a relative bearing of 180° is directly behind you. The cardinal points are the four main directions of the compass. They are North (N - 0° or 360°), East (E - 90°), South (S - 180°), and west (W - 270°). 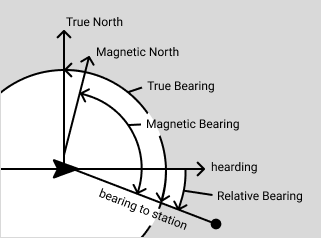 In order to display the bearing, a target point must be selected. If a destination point (or the first intermediate point, if there is one) is selected for navigation, it will be used as the target point. Otherwise, the topmost selected marker will be used.

Navigation along the rhumb line​

Destination widget shows the distance left to the last destination point by following the calculated route.

Arrival time or Time to go​

Speed limit widget shows a speed limit for a current driving road. It works in passive and active navigation mode. The data is taken from OpenStreetMap project.

The widget shows information about your next turn with a picture of maneuver and distance to it. There are 2 variants of next turn widget (small and big) and 2nd next turn which is enabled if turn within approaching distance.

Alert widget combines multiple type of alerts that are displayed in the lower left corner during navigation.

There are options to turn on and off specific alerts such as: Traffic warnings, Pedestrian crosswalks, Speed cameras, Tunnels. Other alerts are active by default, if alert widget is enabled. For speed limit alert, you could configure Speed limit tolerance within voice prompts to relate vehicle speed with GPS-speed more precisely.

Most of alerts are displayed and announced within 15 seconds, same as Passing waypoint / favorite / POI.

Alert types have different visuals that depends on Driving region which could be configured via Settings → General settings. OsmAnd doesn't have a goal to represent 100% identical road signs but to indicate some similarities.

When driving along a street or highway, the widget shows the name or designation of the current street (road) with a blue arrow.

When maneuvering, the widget shows the scheme of the maneuver and the name (designation) of the street (road) where to turn.

Approach POIs/Favorites/Waypoints widget is combined with Street name and displays approaching and passing Points of interest, Waypoints of followed track, Favorites along the route. It displays name, icon of the point and 2 distances: route distance and deviation distance. Route distance (top) displayes how much distance needs to be covered by following route, deviation distance is a straight distance from the closest route point to the point itself.

iOS: in addition to the distance from the nearest route point, the side (left or right) of the route where point is located is also shown.